Autumn (foreground) and Salem of Triangle Chance for All came into the Microsanctuary at different times, from different places, but when both were adolescents. After a few weeks of socialization, they became best friends. Now they are almost never apart.

Every evening when we bring people inside for bed, we typically take Autumn in first. Inevitably Autumn makes a fuss until we bring his buddy inside, and Salem runs up to us when we go to get him, expectantly waiting to be picked up and carried back in to see his friend.

The bond between these roosters is absolutely charming, just as the larger rooster flock they are a part of is delightful to behold. Our cultural assumptions and notions about roosters are sadly shallow reflections of their true personalities. Living with them as we do, as vegans, we cannot but appreciate their beauty … and feel dismay over the fact that so many see them as merely unwanted “byproducts” of the eggs they eat.

Autumn and Salem are individuals, and they are a pair. They are not, and never were, mere byproducts.

It is 6:30 a.m. on a Monday morning, and I am carrying a screaming (not squealing) potbellied pig named Lola to the car. I will spend over thirteen hours that day taking her to her permanent home at PIGS Animal Sanctuary in West Virginia, after having rescued her from sad conditions and having cared for her for two weeks prior …

Three years ago, this scenario would have seemed entirely foreign and utterly intimidating to me. I have been an ethical vegan since March 1999, but most of that time was spent in isolation—as the only vegan I knew wherever I lived, and as the only member of a one-person household. My dedication to avoiding a part in the exploitation of non-human animals was (and always has been) central to who I am … but the notion of bringing others into my life was another story.

I mention all of this in a past-is-prologue sort of way simply to throw into relief that image of me with a screaming pig in the wan, pre-dawn light. Thankfully, Lola was not screaming because my novice hands had an improper hold (I managed to master pretty quickly the art of picking up an unwilling pig), but because pigs simply do not like to be picked up.

I know this now, both from research and from experience, much as I know that roosters make a particular sound when they find food for their hens, baby goats suck down a bottle at light speed, and rescuing animals in need is perhaps the most satisfying activity one can do as a vegan.

My wife, Rosemary, and I each had dreams of starting an animal sanctuary before we met in cyberspace, and eventually in person. She was the one who actually set my feet walking on the path of rescue, though: a little over a month after we started dating I rescued a deaf former bait dog whom I named Iris, and it was all a fairly quick transition from isolated hermit to animal caregiver.

Once we moved to Chapel Hill (a return for both of us, but in different ways), we quickly realized that there was an urgent need for rescuing farmed animals in the Triangle. After helping secure a good future for a white goat named Lily and then for Bubba the famous ram in Durham, we started thinking seriously about putting more—and better organized—energy into getting farmed animals off the agricultural assembly line.

Thus was born Triangle Chance for All. There was and has been an astounding response to our efforts to rescue and provide or secure permanent sanctuary to farmed animals, and to couple that with outreach and education to promote a vegan lifestyle. For us, the two are intimately connected: rescuing farmed animals helps individuals but does nothing to stop a system of exploitation, and focusing only on advocacy leaves many individual animals with no chance for a better life. 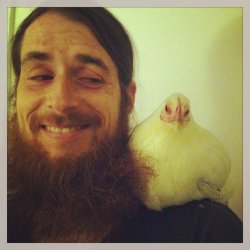 For me, vegan advocacy is filled out, completed, and made fully consistent by this life of animal rescue and care. Although it is a very new way of living, I find it very natural to live in a home that is also our microsanctuary for rescued farmed animals (along with our own rescued cats, dogs, and rabbits). It also makes sense to be building a community around this twofold idea that veganism is the only satisfactory response to the suffering of non-human animals and rescuing individual victims of that system is a worthy endeavor to pursue as a vegan.

I could not have imagined myself saying any of that three years ago. And I am sure that many people reading this feel the same as I once did. After all, many of us might see cats or dogs as a little intimidating but still a normal part of your average household. Farmed animals, however, are often viewed as “other,” even by vegans: they live on farms somewhere out in the country and are owned by farmers … unless they are lucky and go to a big farm sanctuary that is also out in the country and run by a different sort of farmers.

But what if every vegan extended their circles of compassion and companionship to include, actively and directly, the millions of farmed animals who somehow get a chance to get out of the exploitative farming system? What if more vegans considered a flock of chickens in the backyard or a couple of sheep out by the garden normal … not “other”? What if more vegans began to see themselves as caretakers of their own microsanctuary, be it on half an acre or a dozen acres?

How much good could we, the ones who already care about the well-being of farmed animals, do for individuals who have been bred only to suffer and die for human ends?

The day after my trip with Lola to West Virginia, I spent another twelve hours in the car transporting an injured rooster from Georgia to Carolina Waterfowl Rescue. While I was driving on Monday, TCA rescued two more (very young) chickens from a local shelter, and we were all preparing for a bake sale through which we could spread the word of veganism over a vegan cupcake or cookie … And while all of this seems normal now that I have committed myself to the life of an animal rescuer and advocate, I still occasionally reflect back on where my life was just a short time ago and remark on how quickly things have changed.

The deep contentment and peace I feel now, beneath the frenzy of rescuing animals and helping to run an organization, to me reflects the fruition of my principles put into practice. It makes me feel, finally, that I have an answer to Martin Luther King, Jr.’s “most persistent and urgent question”: “What are you doing for others?”

And I am grateful for that.