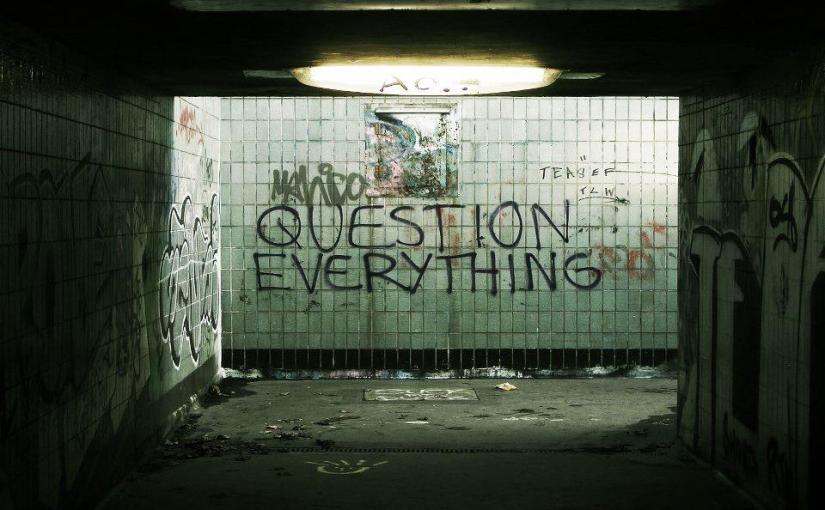 When I wrote the post preceding this one, I thought I was committing social justice suicide. So I admit I didn’t put a lot of thought into describing what Radical Veganism is or what it should look like for anyone other than myself, except for writing up the brief list of recommendations to be radically vegan. But here are nine key ways in which I would further define radical veganism.

Animals are persons of a marginalized community.

The most foundational aspect of radical veganism is the one that I thought should have been the most obvious, but it is somehow the least agreed upon: not only are humans a species of animal…but animals are people. Why is this important? Well, in response to a recent action she was engaged in, vegan Mike Stone told black vegan activist Brittany Lynn,

Like, okay, holy fuck. Setting aside the fact that a white man issued a veiled threat against a woman (and man-oh-man that is HARD to set aside, so we might make a whole future post about that), this illustrates 1.) that many people DO NOT fundamentally understand that animals are themselves a disenfranchised minority group, 2.) white people on the whole are pretty contemptuous of ‘minority groups,’ and 3.) the pervasiveness of white savior complex in veganism is real.

This is why I use the language of de-personifying marginalized communities instead of de-humanizing them. Human is not a useful rubric by which to confer personhood. Animals have language, culture, society, and complex emotional relationships. And not recognizing them as a marginalized community of persons is itself an erasure.

Furthermore, seeking solidarity with a broad coalition of other minority groups is not only prudent, it’s necessary. Because on the other side of this, part of the reason why we have been so limited in our success as a movement is that other social justice groups don’t realize that animals are an oppressed minority! It would be much harder to dismiss veganism if we forced ourselves as marginalized people to stop looking at animals as food and acknowledge that we are committing atrocities against marginalized people of all species. Also, speaking of those loud minority groups…

Radical veganism elevates the perspectives of marginalized persons who can speak authentically about our experiences of oppression as they relate to undoing speciesism.

For a very long time,  the movement for animal liberation has relied heavily on the perspectives of cisgender straight white men as leaders, which is an unusual approach to liberation. It makes much more sense for people who come from oppressed backgrounds to be the architects of freedom. We tend to know what we’re talking about. And those architects aren’t limited to black voices. I’ve learned a great deal from activists like pattrice jones, Sunaura Taylor and Zarna Joshi. So there is a broad scope of female, queer, fat, Muslim (and more) voices to hear from.

A lot of people (once again, usually white) think it’s prudent to de-politicize veganism because attaching veganism to politics makes it complicated and fussy. “Veganism should be simple. Veganism isn’t political. People from all political backgrounds can be vegan. I don’t even like to talk about politics.” But that’s probably the most unsophisticated thing I’ve ever heard.

Saying that we need to keep identity politics out of our veganism ignores the fact that other animal HAVE IDENTITIES. And it minimizes the effect that political discourse has on animals. Don’t see how? Well let’s just see what happens to animals if President Trump is successful in building his wall with Mexico.

Radical veganism is an extension of the current vegan philosophy that honors the history of veganism that pre-dates introduction of the word ‘vegan’ into western society.

When a lot of us reach for the definition of veganism, we head straight for the one provided by Donald Watson in the 1940s (possibly with updates by The Vegan Society in the 1970s). There’s nothing wrong with this definition. But identifying veganism in this singular context without any mention of previous cultural influences doesn’t resonate for me because it feels incomplete. Rastafarianism predates Watson. Shakahari predates Watson. And it’s important to decolonize our veganism by recognizing and exploring those influences.

Radical veganism embraces the broad spectrum of social, cultural, intellectual, and scientific advances we’ve made since the mid-twentieth century when European veganism was popularized.

Since Watson rolled onto the scene more than 70 years ago, a lot has changed. The scope of discoveries of animal sentience and intelligence has broadened immeasurably. Our cultural understandings of gender and sexuality have expanded. We’ve learned so much more about gender presentation in animal societies. Conversations about food justice…legal protections for agricultural workers…medical discoveries about health…climate change science has altered dramatically. It’s unproductive to exclude these shifts in our conversations around veganism.

Why? Because we have to deconstruct the institutions that create oppression in the first place. And white supremacy is itself one such institution because it was whiteness that politicized ‘human’ as an identity separate from and superior to ‘animal,’ a shift that allowed for the enslavement of black people because we were (and are) dehumanized, nee de-personified, in the eyes of whiteness.

Now there’s an important distinction to be made here. Notice that I did not say, radical veganism is anti-racist. Obviously, most of us already subscribe to the notion that racism is bad and that we should oppose it. But very few of us understand white supremacy or how we contribute to it every single day. When you mention white supremacy to the average white person, vegan or not, they think you’re talking about isolated cases of extreme racism committed by people who wear white hoods, and they think themselves far removed from personal culpability.

Below is a comment from a YouTube vegan activist in response to me explaining the pervasiveness of white supremacy.

Of course I replied with very recent and blatant examples of white people holding institutional power in western society through housing, education, and policing (note: I used British examples because this person also subscribes to the poor assumption that extreme racism is limited to the United States). Still steadfastly unconvinced by factual documentation, I abandoned the conversation. You have to recognize when to cut your losses.

Radical veganism is the difference between emancipation and liberation.

As I previously mentioned, veganism needs to move into a more revolutionary space than we know it to exist based on our twentieth century understanding of it. We need to move past the point of asking ourselves if animals are worthy of moral consideration because that question is outdated. The existence of animal welfare laws and protections demonstrates that we already do think animals are worthy of moral consideration. The concept of moral consideration still meaningfully objectifies them. We need to stop talking about them in a philosophical and conceptual way and describe them accurately as political prisoners because THAT IS WHAT THEY ARE.

Twentieth century veganism focuses heavily on emancipation. Emptying the cages is a familiar battle cry. But empty cages is only one aspect of liberation, and one that has proven to be a poor way forward for any marginalized group. As has been historically demonstrated, emancipating individuals from enslavement does not produce freedom from oppression. The system only finds new ways of enslaving us. In the United States, that includes everything from sharecropping to the prison industrial complex to wage slavery of any kind. Which means that…

As I mentioned previously, the mainstream understanding of veganism is at best a consumer boycott and at worst a dietary fad. A lot of this has to do with the effect of capitalism. Many of us think capitalism is perfectly okay. That if we simply create a demand for vegan products and abandon animal products en masse, then all of the cages will be empty and animals will live happily ever after.

Agribusiness does not give a fuck about animals. Nor does it give a fuck about you. Agribusiness only cares about money. If torturing animals and chopping them up into little pieces isn’t immediately profitable, that doesn’t mean they will not still be exploited. It does not mean that we will not still colonize their lands. It does not mean chickens’ reproductive organs will magically stop killing them prematurely because decades of eugenics have turned them into egg-laying machines. And it does not mean that we have learned to provide healthcare and housing for animals whose lives and families have been destroyed by aggressive industrialization.

I’ve said this before and I will say it again here. Please enjoy your vegan products. I am not telling you that you’re a bad person if you don’t eat a whole foods plant-based diet. Personally, I’m very glad that we have now developed vegan cheeses that tastes as good as dairy. But if we do not curate our movement, capitalism is going to swoop in and pretend to save the day when it was capitalism that got us looking fucked up in the first goddamn place. Capitalism will only find different ways to exploit them and us. It is neither revolutionary nor radical.

And speaking of radical, some final words on radical veganism. Usually I am not one to attach qualifiers to veganism because qualifiers can create factions instead of more solidarity. However, sometimes more clearly defining ideas provides us with greater understanding of ourselves and our goals.

Furthermore, qualifying our veganism as radical reclaims ‘radical’ itself. Western society has taught us to fear radicalization by attaching it to things that are bad, e.g., radical Islam. But the core meaning of radical is to get to the root. And that is what we want in our veganism. To get to the root of oppression and become liberated from it.

Where this goes from here, I don’t really know. I’m literally making this up as I go along. And yes, there’s a lot I left out. There are plenty of places where I could expand on much of this. But this is a blog entry, not a book. If you made it this far, I’m surprised. I just wanted to provide the basics for people to get a better understanding of where I’m coming from and why. In the future, I want to discuss tools and strategies for the radical vegan activist. So maybe we’ll pick up there.