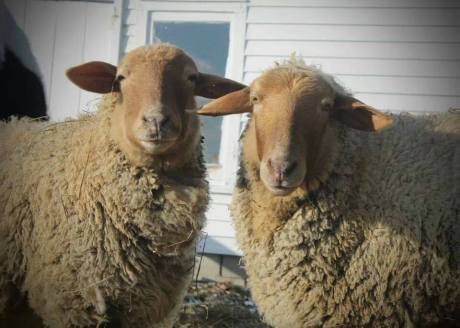 As a vegan advocate, it is always a question for me of what will finally get someone to wake up and realize that he or she can no longer exploit animals. For most people, their only interaction with farmed animals is at the end of the production process–as a hamburger, as ice cream, as leather boots…

Yet many people spend much or all of their lives in direct contact with farmed animals and somehow persist in the exploitation. We call some of them farmers.

It is almost an Earth-shattering moment when we see someone who raised animals for food transition to veganism. These rare few, farmers like Harold Brown or Howard Lyman who are also two vocal vegan advocates, made the connection, saw the animals in a new way, and stopped. They went vegan.

Christine Mariani Egidio is one such person. She lives in New Jersey and was well on her way (with her husband and sons) to making a life as an animal farmer. Her story of becoming vegan is a powerful and inspiring example of one person’s ability to put honesty and compassion over habit and personal tastes. She was kind enough to share that story with us…

In April of 2009, we purchased 32 acres and decided to get into breeding and selling meat sheep to help pay the mortgage and to provide income after we retire. We decided on Tunis sheep because they are very docile and easy keepers. I purchased three breeding ewes and a ram (Lasa Sanctuary now has two of my original breeding ewes, Lily and Roslyn. The third–Sofia–died along with her lambs during her second year with us.)

I am horrified to tell you my motto about our sheep breeding business. I would tell everyone, “They have a really great life, up until they no longer have one.” It makes me cringe now to type that. I wholeheartedly believed in the “humane slaughter” myth. And even worse, even though I soon learned that sheep all have individual personalities, are SMART, and definitely form bonds with one another, show joy, fear, friendship–every human emotion–I still did not make the connection. I have always been an animal lover, rescuing dogs, cats, horses–but I still did not make the connection that farm animals are no different in their desire and right to live.

We intentionally bred sheep for three years (the fourth year I was vegan and had separated my ram from the ewes, but he bred quite a few of them through the fence!). I lost Sofia during delivery and Roslyn’s daughter Cinnamon (Daisy Lu’s full sister) during labor. I also lost three lambs. All heartbreaking, many tears cried, but still I didn’t get it.

I’m married and have two sons in their twenties, both living at home. My husband, my younger son Derek, and I were all on the Primal Diet (similar to Paleo), so we were eating more meat than anything else. I always tried to buy organic, grass fed, and it was hard to find in our area and very expensive. So Derek got the idea that we should raise pigs, turkeys and chickens for meat (we already had hens for eggs). He was also an animal lover, so he said that in order to make sure that the animals were not mistreated during slaughter, and in order not to cause them stress hauling them from our place to the butcher, he would learn how to slaughter them himself. He felt that if he could do it very calmly and not be rough with the animals, they would not be afraid because they would know him–and that would make it okay. He told me he was going to watch YouTube videos on slaughter and then would find a local butcher to show him first-hand what to do.

I remember so clearly the day I came home from work and Derek said to me, “Mom, I’ve decided to become a vegan.” He is very athletic, and the only reason I could think of to become vegan was he thought it was healthier. So I asked him, “For your health?” And he told me, no, but that he had watched a video of pigs being “humanely” slaughtered by a person they knew, who was handling them gently and calmly, and the pigs were still panicking, trying to get away, and the other pigs in the pen knew what was going on and were screaming and trying to escape. And then he very simply said, “Mom, they don’t want to die.” Such a simple sentence, but so profound. Because that’s it in a nutshell. All of the arguments people have against veganism come down to that one fact…the animals don’t want to die.

I had never known anyone who was vegan–except one friend who had a son who became vegan and lost so much weight and looked terrible. Knowing what I know now, he probably was not eating properly, too lazy to make himself proper meals. I truly believed that humans NEED to consume meat/milk.

I watched Derek for the next couple of weeks and asked him questions. I was haunted by what he said–that the animals don’t want to die. So I decided to give up meat. For about 3 months, I still drank cream in my morning coffee, ate cheese pizza, and didn’t read labels to see if they contained eggs or dairy. But then one day, I saw a post on Facebook about the dairy calves being dragged away from their mothers, and it suddenly CLICKED and I became fully vegan. It will be two years this February 24th.

We had 23 sheep at the time we stopped breeding, and most were re-homed to sanctuaries like Lasa Sanctuary and to vegan families. I still have seven now as my pets.

If you had asked me last week if I ever thought Donn (my husband) would become a vegan, or even a vegetarian, I would have adamantly said NO! He is a typical meat and potatoes guy, very picky, and limited in what he will eat. I would make delicious smelling vegan food, and he would comment on how good it looked and smelled, but would turn his nose up at it when I offered him some. He has been vegetarian for four days now, has stopped using cow’s milk in his many daily cups of coffee, and I truly believe that he will eventually go vegan.

Thanks to Christine for sharing this story. It is heartening to know that change is possible, no matter what path a person may be on. Animals surely do not want to die, and we have no right to mete out death to them…just as we have no right to use them as means for our own ends.

Faced with these truths, the only defensible course is to go vegan.

I am a vegan (since 1999), a curious skeptic, a bookworm, a nature lover, and your garden-variety neurotic. My wrestling with chaos manifests as writing and, with my wife, tending our friends the plants and spending quality time with our rescued furry kids. I am fun at parties (because I am never there) and so unique that I am easy to forget. So take that, modernity. View all posts by Justin Van Kleeck

2 thoughts on “Making the Connection: A Personal Story”